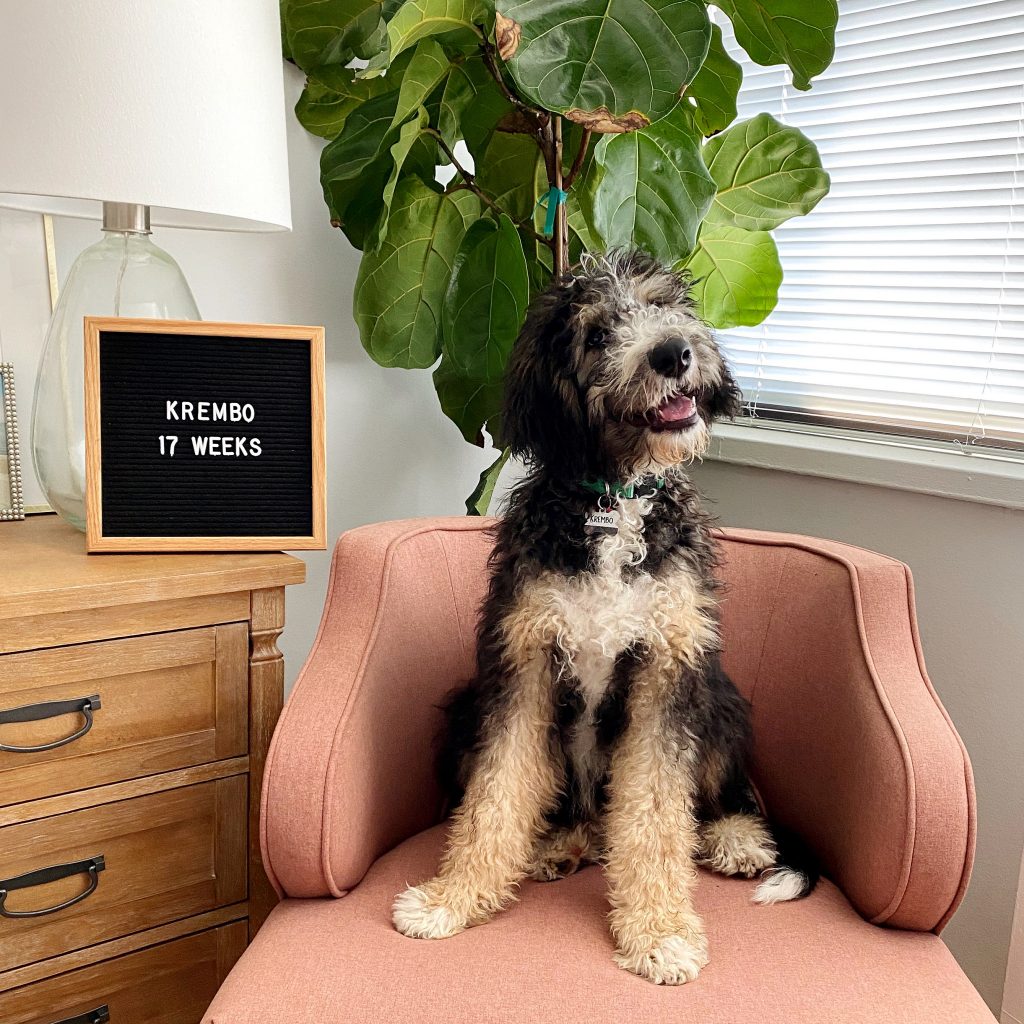 Well, Krembo is officially 17 weeks old! I can’t believe how long we’ve had him already–it feels like forever and a day all at once. I wanted to share how he’s doing and how the last few weeks have gone, since they grow and change so fast and we’ve learned so much. If you want to read how the first few weeks of having a new puppy were, start with this post!

Krembo LOVES humans, especially kids. When a kid runs by on the street, he’ll sit and patiently wait for some pets (although they almost never come to pet him… damn you covid!). He also loves to play with other dogs and his socialization skills have been getting better every week. We take him weekly to Amanda Gagnon Dog Training, where they have puppy socials. They let the puppies play with each other and correct bad behavior! We also dropped him off at their puppy day school a few weeks ago, where he learned a few new things, like “touch”!

Now that he has all his shots, we take him to the park twice every day to play with other dogs. Everything changed so much when he finally was able to run around with all the other dogs (after his rabies shot)–he has ample opportunities to burn off all that puppy energy now! And he sleeps almost all day when he’s not playing with his friends. He loves it so much, and I have to literally drag him out of the park every time! Which isn’t great, but we’ll tackle that later :)

He’s really good with city sounds, so ambulances and fireworks don’t phase him, thank goodness. We are working on the vacuum cleaner; he’s still not a fan there. When it comes to desensitizing, I can’t recommend this enough: stuff treats down their throat until they don’t care about the scary sound anymore. You’re welcome. 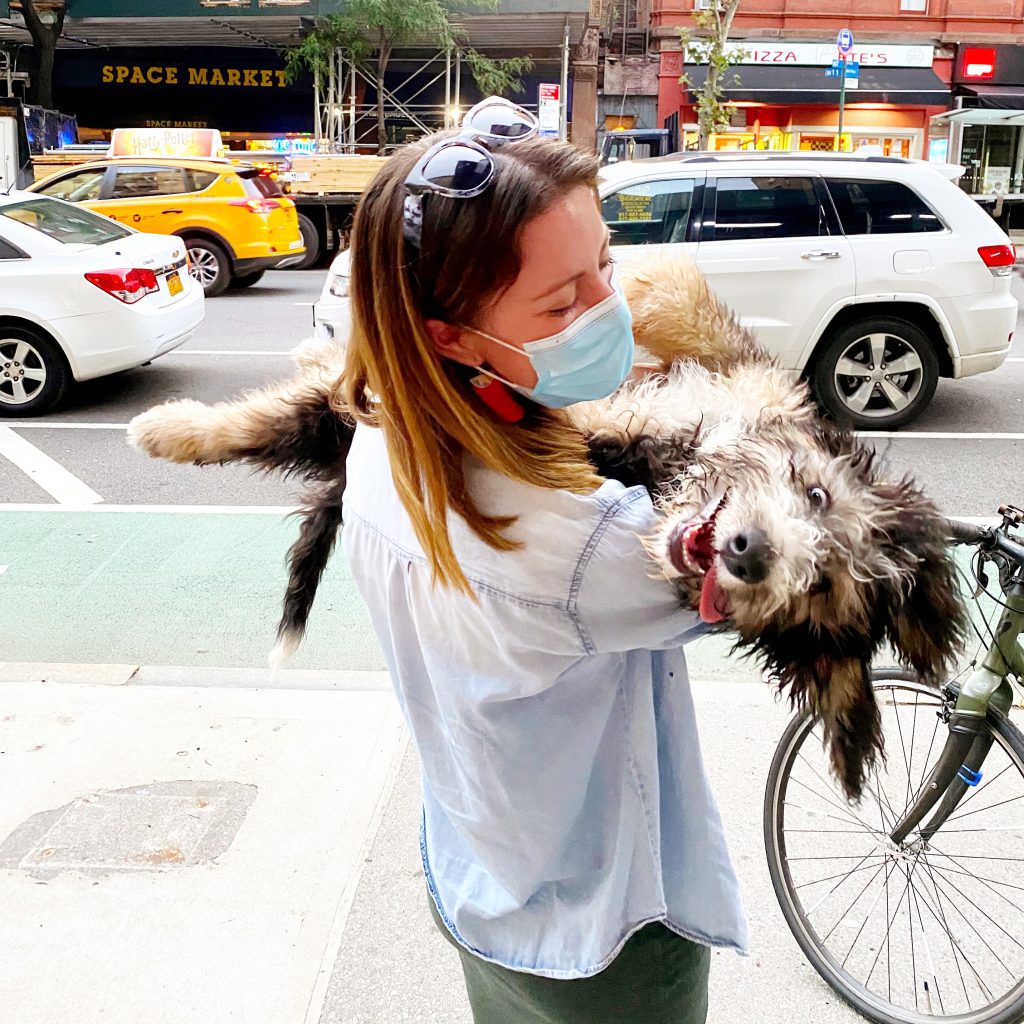 So far, Krembo knows sit, lay down, roll over, touch, come, and he is working on stay (and doing so well!). We are also working on “go to your crate” and “off,” because he loves to jump on the furniture. He is getting REALLY big, so will definitely be able to get on the couch on his own very soon.

We don’t let Krembo on the furniture yet, because we want him to learn to be invited to come up and told to get down. Since he doesn’t listen super well yet, no couch for puppy! Although we probably won’t be in control of that much longer, because he’s got some really long legs and is a risk taker. 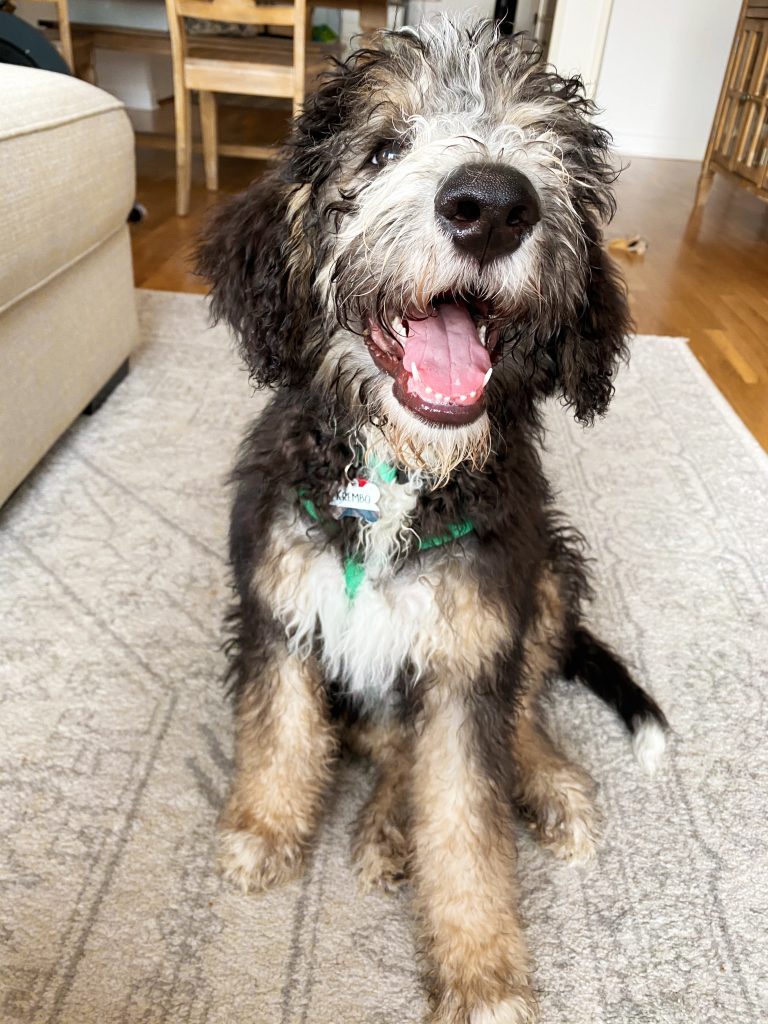 Walking is probably the biggest hurdle right now, because Krembo loves to just sit or lay down on the concrete instead of walking. If he doesn’t want to go somewhere, he just ploops down and I have to physically pick him up, which is getting really hard! He also feels the need to stop and stare at every single dog that comes by, and in New York City, that’s every minute. I have callouses on my hands where I hold his leash, so we definitely need to work on these things! We’re hiring a private trainer this week to help get that under control; stay tuned! 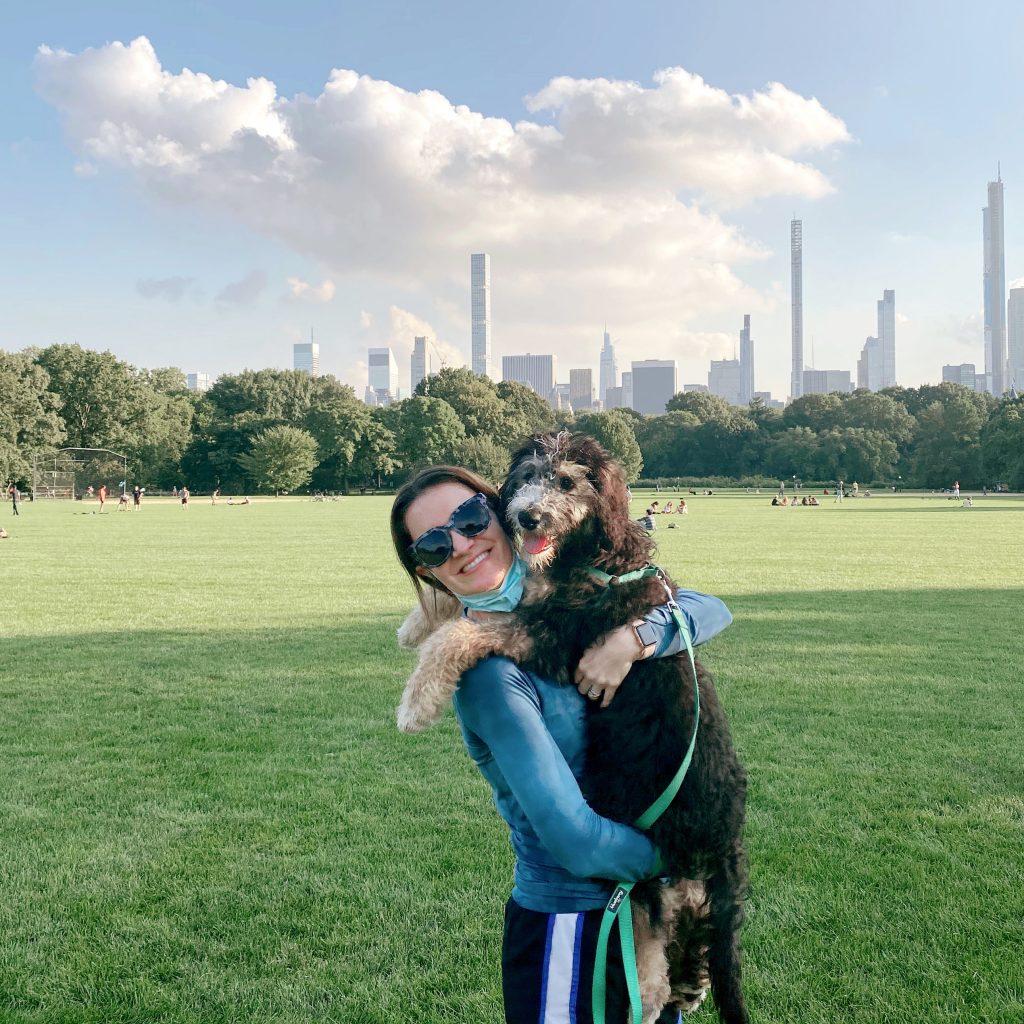 We had Krembo going inside on the pee pads until he got most of his shots, and then slowly transitioned him to going fully outside. To get him to transition to going outside, we gave him very high value treats when he did go outside (Applegate organic hot dogs, because regular hot dogs have lots of fillers)! We took him out every 2 hours the first few days to make sure he never went in the house. He had maybe 2 or 3 accidents during the week of outside potty training, and then got over it really quickly. He’s completed stopped going inside and we are done with the pads after just a week of this. Woo!

To let us know he needs to go, he quietly sits by the door like a good boy. It’s the cutest thing. We are also extremely lucky in that he can hold it for a long time for his age–he holds it all night when he’s sleeping for 8 hours, and only needs a few potty breaks during the day now!

Note: Many people in the city like to let their dog go on the pads and/or outside, depending on the weather. Krembo is going to be a big guy; I don’t really want a 70lb dog pooping in the apartment but to each their own! 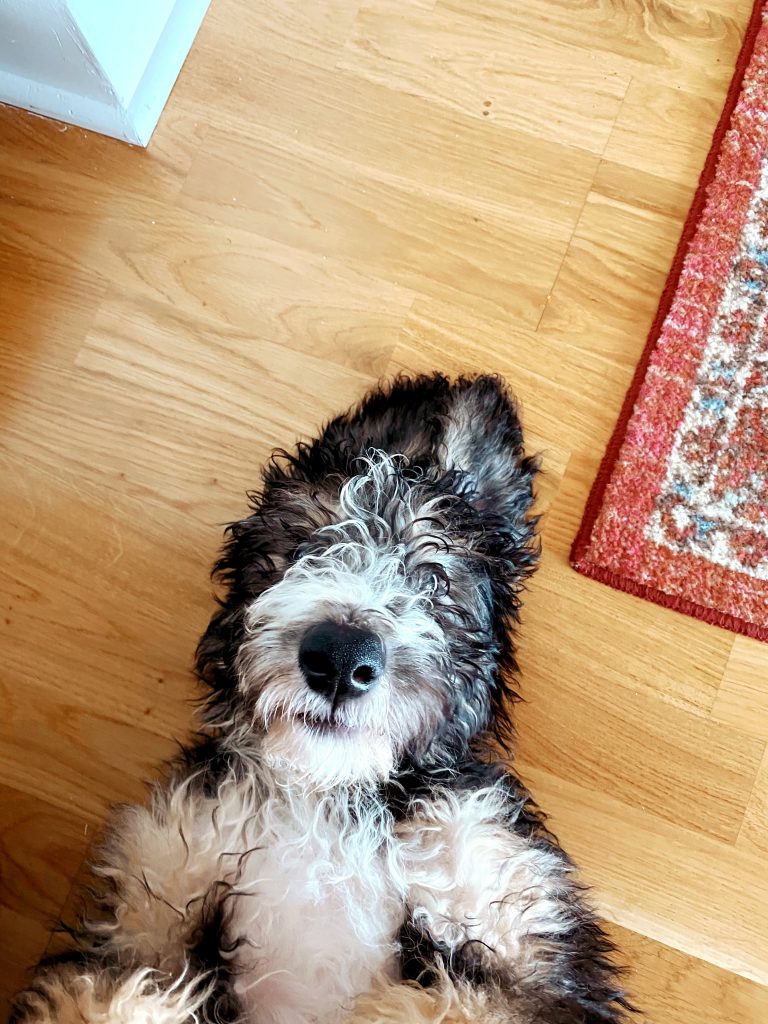 We had Krembo on Pro Pac for a while, because that’s what the breeder had him on. However, I’m 99% sure he’s allergic to poultry, so we transitioned him to Purina Pro Plan Lamb & Rice. He loves it!

We also recently started giving Krembo bully sticks and split antlers because he is teething HARD. He stole our friend Lulu’s bully stick at the park a few weeks ago and swallowed the end of it whole, which scared the crap out of us so much. So, we invested in this bully stick holder that stops the dog from eating it whole! He loves it so much because it also gives him leverage for optimal chewing.

Overall, Krembo has become much, much more manageable and such a joy to be around. The puppy blues are very real, but I promise they absolutely get better! We still have a long way to go with training, but we are so confident that we’re on our way to having the best doggo ever.